Or, Free Speech - Deal with it.

MASON CITY — A billboard on the 600 block of South Federal Avenue berates the Obama administration in a manner that has offended some who have seen it.

Mark Tlusty, who helped organize the “Tea Party” anti-tax protest in Central Park in April, said, “We’re just getting upset at how the government is running things. We wanted to express ourselves and chose this way to do it.”

But not everyone is happy. Someone got their panties in a bind:

Kathleen Wild of Mason City contacted the Globe Gazette to express her concerns after seeing the billboard.

“I think it’s a terrible thing to have above Mason City, which is a city of diversity,” she said.

Last time I checked we live in a nation of Free Speech. (At least it's supposed to be.) I'm guessing Kathleen's version of Mason City has no diversity of thought. Irony, anyone? 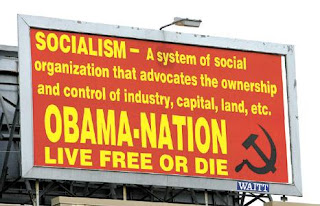 Posted by strandediniowa at 10:40 PM

obvioulsy this twit doesn't understand that diversity doesn't mean everyone must say and believe the same things.

Somebody should buy her a dictionary and then teach her to read.

I think we should buy her a steaming hot cup of shut the f**k up.

But that would be rude.

She needs to pull her panties out of her ass and go get fucked.

Oh Ozcar, you are so heartless. In re; to your recommendation would you help her in that department? I wouldn't, not even with your equipment. Why would you wish that on some poor soul who has never done you any wrong?