I've always been warned that Bill Gates planned to take over the world, now there's proof:

The first trials of controversial sunshielding technology are being planned after the United Nations failed to secure agreement on cutting greenhouse gases.

Bill Gates, the Microsoft billionaire, is funding research into machines to suck up ten tonnes of seawater every second and spray it upwards. This would seed vast banks of white clouds to reflect the Sun’s rays away from Earth.

From over at Borepatch: What could possibly go wrong? 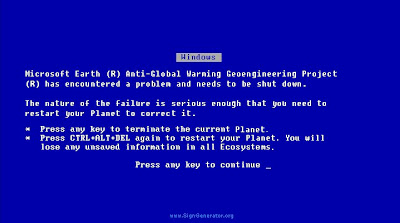 Makes "The Blue Screen of Death" mean something else entirely.
Posted by strandediniowa at 6:21 PM

They're in this together, the bastards.

Good point, stranded. Will he be able to balance this, or will it tip over into a new Ice Age?

I figure it this way: the warmer it gets, the more water will evaporate naturally, and then we get more clouds. They then reflect more sunlight back into space, and it cools things back down.

Another point: I remember seeing the six electric motors that pumped the water for Knott's Berry Farms' Rapids Ride. They were about six feet tall, and three feet in diameter. I don't know their horsepower rating, but with motors that size, it had to easily be more than 100 HP per motor. That is a tremendous amount of energy. So, how much energy will Gates' plan divert from transportation, indoor climate control, and all the other energy needs?

That's an excellent point Crotalus. All that energy that could be used to produce goods and services, or heat and cool our homes will be used in a fantasmigorical engine of BS.