Chaired by our former Governor Vilsack.

“Strong rural communities are key to a stronger America,” Obama said in releasing the order. “That’s why I’ve established the White House Rural Council to make sure we’re working across government to strengthen rural communities and promote economic growth.” 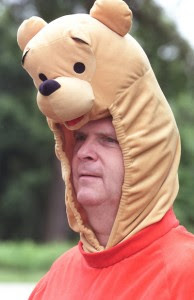 "Raw honey should be outlawed."
Tom "Silly Old Bear" Vilsack, Secretary of Big Agriculture
More control over rural America, a growing War On Farmers and now a sorry excuse of an governor gets another chance to ruin whats left in Iowa. As the current Ag Secretary who wouldn't know the difference between a cultivator and clevis, old Tom will sure spew out new rules for every farmer in the country.

As any cabinet secretary knows, it's good to rule with an iron fist. 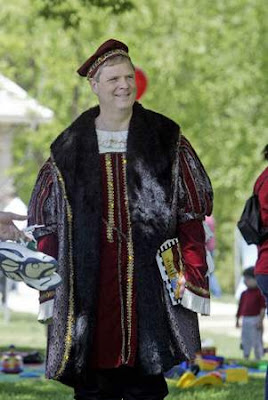 "You mere peasants can't possibly know more about agriculture than a lawyer-turned-governor of that state that grows plants of corn with the smelly swine."
King Thomas from the Mount of Pleasant
At least he dresses the part.

It took me a while to find a picture of Vilsack on an actual farm (albeit an organic one): 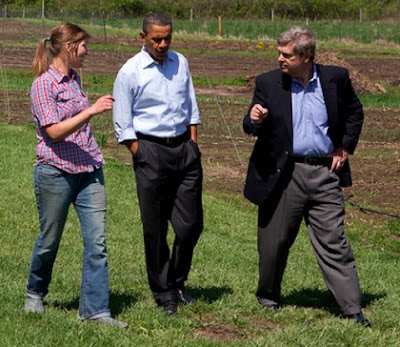 It looks like he's been enjoying a little too much of American produced food products. You know, produced by real American farmers, of which he's never been one. But it's okay, he lived in Iowa for a while.

And this is why a real farmer wouldn't wear Birkenstocks while on the farm: 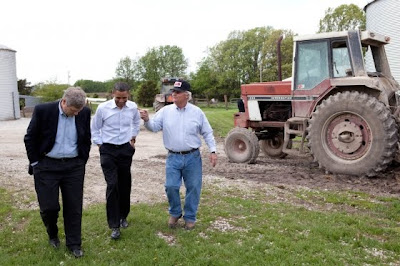 "Yo, Tom. Look what you just stepped in." - Obama
"That's $500 bucks down the drain." - Tom "Shit from Shinola" Vilsack
Neither of these two guys are paying attention to what the farmer is trying to say.

Should we expect anything better this time around? Because the link above to an entry by Sec Vilsack is about economic development in rural America. From over a year ago.

And now we have a Rural Council.

Central Planning worked for the Kulaks, didn't it?
Posted by strandediniowa at 6:01 AM

I honestly believe that they think we are serfs. Excellent pics, BTW.