I've been neglecting this news from last month. The county in which I reside here in Iowa (Iowa County) had a brief discussion regarding banning guns in the courthouse. An agenda item for February 28th.

The local newspaper, the Pioneer Republican (no complete online presence) published an article Feb. 24th, in which our county attorney approached the county supervisors and asked if the supervisors were going to do anything about banning firearms in the courthouse.

A couple of interesting things came out in the article: 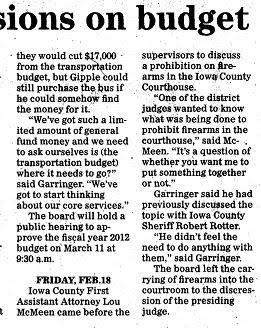 (Forgive me for the poor quality of the scan)

The supervisors capitulated and said it was up to the judges how they want to run the courts. Mmm-kay.

One of the supervisors had previously discussed this with Sheriff Rob Rotter and the supervisor summed up that conversation with, "He (Sheriff Rotter) didn't feel the need to do anything with them."

Seems that the sheriff trusts the citizens of Iowa County.

But to me, the most interesting item to come out of this was the fact that the county attorney was approached by the district judges that preside at the courthouse.

The NRA has been threatening lawsuits over these county gun bans. They will need a citizen of Iowa as a plaintiff and one could show up because of being thrown in jail after they are caught carrying in one of the county "gun-free" zones.

If they come before one of these judges who had requested a ban, would any of those judges recuse themselves? They certainly have a vested and one-sided interest regarding these bans. At least in this county.

I'm fairly certain that not all requests for bans came from judges. Most that I've found came from the sheriffs or county board members. But this shows evidence that other governmental entities have influenced these bans.

And the courts will be where this issue is decided.

Let's hope for an unbiased court.
Posted by strandediniowa at 6:29 AM