In an effort to scare little old ladies and rail passengers anywhere:

Iowans boarding Amtrak trains on Friday should be prepared to see law officers with guns drawn as part of a nationwide “surge” in passenger train security.

The high-security “RailSafe” exercise - which will include local, state, federal and railroad law enforcement agencies - is coincidental to a security alert in Europe in response to fears of a terrorist attack, said Steve Kulm, an Amtrak spokesman in Washington, D.C.

Training is always a good idea, but I'm not keen on law enforcement training with ordinary citizens. People just wanting to get from point A to point B do not deserve to be involved in an exercise.

“We don’t want to give out too many details. We want to maintain some bubble of operational surprise for the bad guys, “ Kulm said.

What "bad guys"? This is an exercise so the bad guys would be fake too, right?

Another bit of news: Lt Gov Patty Judge is homeland security officer for the state. How a former farmer's wife and state secretary of agriculture qualifies for that job would be a good question for her to answer.

She gets to wear cool hats, though: 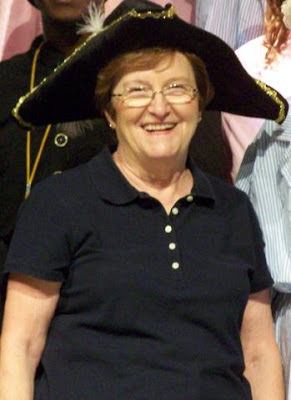 Posted by strandediniowa at 7:02 AM

There are some real problems with that announcement, considering that we really do have terrorists looking for opportunities in this country. My game warden buddies always kept their inspection days secret so that serious violaters would not know which weeks the wardens were cleaning trucks, pressing dress uniforms, and etc. It sounds like the people in charge have no real world experience in the activities they are supervising.

I do agree, announcements are stupid and the exercises should be using ordinary citizens.

The article mentions automatic weapons (journalists get confused, so add grain of salt) and my concern is using ordinary citizen travelers who want nothing more than to get to grandma's house in Boise. An accidental discharge? Panic attacks? They can't get too serious in training because of the recruited "volunteers" and training suffers.

Also, if they do this often enough, people get slack and would think the real thing is another "exercise"... oops.

Are we now like unnamed "extras" on the movie set?

I wonder what my dad would've thought about this.

That should have read "should NOT be using ordinary citizens."