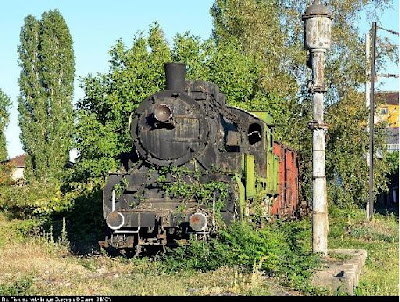 As the old steam engine above, Between Two Rivers has been on hiatus for over a month now.

Not really self-imposed as much as a victim of circumstance. Or as I like to call: "Living the Stranded Lifestyle." In other words, work like a dog and get rewarded... with more work. Pavlov kind of missed the mark and should have studied my employer instead.

As almost 12+ hours of work nearly each day with a couple of overnight server issues thrown in just to make things "interesting," everything has been coming up Stranded. Leaving me with little time for completing any of my projects, both at home and at the camp.

I mentioned to correspondent, Bea, coming home to a computer has been a struggle to come up with anything except throw up another steam engine pic. Posting daily steam engines would certainly be boring to a non-railfan and I'm running out of CB&Q pics as well.

My lack of postings reflected Iowa politics until our governor decided to appoint a Democrat Senator to a state board of dubious necessity. Now a special election between an unknown (to me) and a former news-babe from local KCRG News, will set the balance of power over the next session. Lots of money flowing in state-wide and the local TV stations are busy.

Another item I missed covering is that a state committee of people decided we aren't paying enough gas taxes and our license fees are too low. Apparently a majority of Iowans (none of whom I have heard from) agree, with the Farm Bureau weighing in favor. I'm sure no taxpayer money was used for committee purposes, otherwise we could have used that money for the roads.

Occupy Cedar Rapids drew massive support of 9 people the other day in the downtown area chanting, "Blah, blah, something, something... the people." At least that's what I heard as they "marched" across the street as I waited for the light to change. Maybe they can combine with the peace protestors that hang out on the Second Avenue bridge on Friday evenings to double their numbers. That is, if they are separate members of each group. Nevertheless, good luck keeping warm in the coming weeks. Iowa's winters tend to put a damper on camping out unless your heart is really in it.

Who am I kidding, who gives a rip when you call for a protest and only 9 show up? Good job occupying, guys. Arlo Guthrie would be proud.

With apologies to my few regular readers as to my absence, I will try to post more as time permits. Besides, the silly season of Iowa politics is nearly upon us: the new session at the statehouse and, of course, the caucuses. Iowa's mother's milk for a revenue generating scheme upon the American voters.

To be fair, traditionally, the Iowa voters trend similar to the national voting percentages in presidential elections. So it makes some sense to make Iowa important. It won't matter once the National Popular Vote get their way and abolish the Electoral College and Iowa becomes irrelevant. As well as Montana, Nebraska, North and South Dakota, Alaska... Basically any state that currently has less 10 electors.

This idea of a popular vote for a president has been endorsed by our former governor Chester Culver. The first sitting governor in Iowa in decades that lost a reelection. Yeah, that political genius.

If what I've posted so far sounded bitter, an incoherent rambling of a senile middle-aged balding man from Iowa, then please accept my apologies again.

That's just part of the current Stranded Lifestyle that's between two rivers. With any luck we might be seeing a change soon. But not after another network upgrade and a major vendor application upgrade the weekend of the 12th. That one involves the traditional 30+ hour stretch of work that I'm looking forward to experience again.

Yep, the Stranded Lifestyle. (I'm thinking of copyrighting that)
Posted by strandediniowa at 9:58 PM 1 comment: