Guns used in crimes are sold to the public - OH NO!

The Cedar Rapids Gazette discovered something that has been going on for years:
Confiscated rifles and shotguns that were used in crimes are sold to the public.

The Iowa DNR is tasked to auction property that was confiscated during crimes such as poaching and somehow the Gazette thinks this is a terrible thing.

With no evidence that any of these thousands of weapons have been used to harm another person, the article heavily implies that these weapons could be used by violent criminals, domestic violence predators or any average murderer that happens upon the auction.

Maybe... Possibly... some future crime might be committed so let's not send $80,000 plus each year for the DNR and state general funds.

Two-thirds of the way into the article they give a dismissive glance at attendees needing a purchase or carry permit in order purchase firearms (they wrote "valid firearms permit," whatever that means -ed.). FFL holders could purchase weapons as well.

I've attended these auctions when I had time and spare change in the pocket. I've noticed that many of the guns were purchased by dealers. I've seen attendees turned away because they didn't have a permit to purchase or carry. None were happy about that. But if someone has gone through the process of getting a permit, they've gone through the NICS background checks and could purchase from a dealer just as easily.

But that's not the point.

The Gazette gins up fear and implies that anyone, even those of us who have passed every background check year after year, is a potential criminal ready to take another life.

That's the point to the whole article.

If this is true: "Having access to firearms of any kind can increase the odds that domestic abuse will escalate to violence, Fortmann-Doser said." Then every spouse in Iowa County would have been shot a hundred times over. (Iowa County, Iowa, having one of the highest per-capita gun-ownership in the state.)

Good thing the Gazette is here to recycle fear and innuendo.
Posted by strandediniowa at 6:36 AM 2 comments:

DNR Auction set for May 4th this year

Another change, it's in Polk City instead of at the Iowa State Fair

In the past, I've found a few bargains but I don't know if I'll make it this year.

If you can, please save a gun from a life of crime.

Posted by strandediniowa at 9:43 PM No comments:

A quarter century ago...

the Mrs and I got hitched.

We've come a long way together in spirit, though at times apart.

Our journey does not have a destination, but a direction.

I'm glad I'm not headed there all alone.
Posted by strandediniowa at 11:15 PM 4 comments:

Spent 12+ hour days for the last six weeks on a project to receive a nominal pat on the head.

I'm glad spring is here so I can get work done at Camp Stranded.

So far, something to control the sediment in the pond: 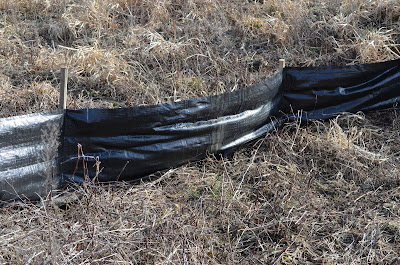 I was able to squeeze some additional work in this past weekend and visit with some squatters: 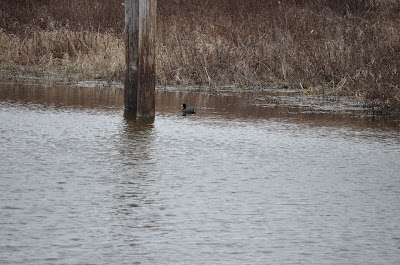 I'm lining up work for this weekend, including but not limited to getting the equipment ready for spring, transplanting some red cedar trees, and battling multi-flora rose. I pulled out a 6 foot honey locust on Sunday and only jabbed myself twice, so I'm optimistic with the rose.

Between the meadowlarks and red wing blackbirds, it was hard to hear much else, but I have something moving into the bluebird boxes. Probably crappy sparrows.

April, May and June are lining up to be very busy on the work front. I'm hoping I get a chance to spend time at the Camp.
Posted by strandediniowa at 6:10 AM No comments:

Journalism at its finest

I don't have a journalism degree but I think most objective people would notice the bias on display at local TV station, KCRG, Sunday morning concerning the report of a new gun control group in Iowa City over the weekend.

At the end of snippets from the on-site reporter, the in-studio pseudo-newsperson, Nadia Crow, read this: "The group led moments of silence in remembrance of the Sandy Hook tragedy. That silence was interrupted by others who disagreed with the group's....."

It can't be just me that noticed her implication that anyone who wasn't in favor of gun control and voiced their opinion that day, did so in a rude and disrespectful manner? Or it could be that I just inferred it with no evidence.

It's not part of this report that was originally aired on Saturday night:

But that report also implied the same thing with these words. "... To prevent future victims of violence by remembering the past victims. Only some people did not want to be quiet."

And this in the online version of the report:


“We’re here to remember the victims of thousands and thousands of individual and mass murders that have happened,” Jim Tucker said.

Not everyone was so respectful. A handful of dissenting voices pierced through the silence to show their Second Amendment support. Throughout the rally, those voices sparked some heated debate.

Can you figure out who the villain of  the story is here?

KCRG graciously provided the answer for us.
Posted by strandediniowa at 11:17 PM No comments: