It's a free country

And I can choose to spend my money somewhere else besides Buffalo Wild Wings in Cedar Rapids, IA: 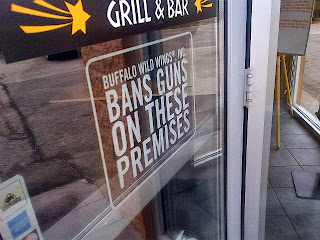 Any local business can put up a sign (ineffective as they are) as an ill-guided attempt at security. What this means to many is they are not welcome if they choose to carry but the business is open for any thug intent on harm.

I wasn't carrying and I didn't feel welcome after seeing this sign.

But seeing a similar sign at my county courthouse, I can't very well conduct all of my business elsewhere.


Based on the order of the Chief Judge, possession of all firearms is prohibited in the courtrooms, judges’ chambers, court reporter offices, jury rooms, clerk’s offices, juvenile court offices and hallways outside the courtrooms and clerk’s office of the Iowa County Courthouse, unless possessed by and on-duty  peace officer as defined by Iowa Code... (Sorry, but the picture did not turn out well)

If someone uses the Don't Show, Nobody Knows policy then how would they know?
Posted by strandediniowa at 5:47 AM 2 comments:

I thought they were on furlough

From time to time I look up information from the forestry service (a part of  the USDA). This is in relation to my efforts to build up Camp Stranded. Two particular reference documents I had found weeks ago was Silvics Volume 1 and Volume 2. These tree references had been converted to PDF documents years ago and are out there on the Forestry Service's website for people throughout the world to use. Other documents are there as well but I hadn't the time to review all of them.

This week I wanted to reference volume 2 and elsewhere on the site for any other information on tree seed propagation. Last week, I had access.

This week, however, I'm out of luck:

Apparently it was deemed necessary and vital to remove access to information that had been listed on our nation's servers for years.

I could understand if the server was unplugged because the Secretary of Agriculture, Tom Vilsack, wanted to save money on electricity because now there is no money in the budget to pay for it. But a server is running in order to redirect it to the "Blame the Republicans for the shutdown" webpage.

I could understand a 404 page not found message or a "Server unavailable". But someone, after the shutdown started, logged in and placed this up for the world.

I can even understand if a site hadn't been updated and still showed data from prior to the shutdown. For instance, the site still displayed Sunday's temperature in Kalamazoo, Michigan.

Remember folks, shutting down information sites that are basically static information, that hasn't been updated in years, is a vital service and that Republicans in Congress are the evil reason for the government shutdown.

But then there's this: you can still apply for a job at usajobs.gov. Never mind that this is a website that is an access point to a database that is not static. I found several jobs here in Iowa that were posted this week. Apparently it is a vital and essential service to post jobs that no one can interview for until after the shutdown. Here's one posted for a cook position, opened yesterday.


Yes, the VA hospital needs cooks. My point is to bring out the notion that this "shutdown" of non-essential government services is an intentional attempt to inconvenience and annoy the population and then to blame the other party.

This crap I blame on the administration and the bureaucrats that hold these fed positions. Don't expect sympathy from this taxpayer when these little "dirty tricks" are pulled. Back in 95/96 employees received back pay for their furlough and I expect this time, they will again.

As a warning to democrats, my liberal friends and co-workers agree with me. The president is losing this argument by pulling websites down or putting barricades around monuments that had been open 24/7 prior to the shutdown.
Posted by strandediniowa at 6:35 AM No comments: