This reminds of many scenarios, not the least of which is my employment: 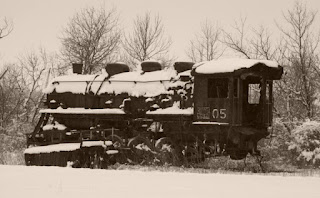 The 8305 has lost all her friends, at one time there were about a dozen 0-8-0 steam locomotives on this siding, now she sits alone and tender-less the last of the Northwestern Steel & Wire mill's engines, left with a cold and uncurtain future. The locomotive was sold to an individual under the agreement that it would be moved within a year, but that was over a year ago. The Tender was moved but the engine still sits on a siding in Galt, Illinois. The IRM has taken back ownership of the engine after the contract with the new owner was not fulfilled, but the new owner now has the tender in their possession. It looks like a loose/loose situation for both parties.

4 system upgrades and 2 network upgrades implemented in the last 4 weeks. We have one more system upgrade to implement in late June if the local telecom can get things done in time. I know I posted that I would give a little more time to this lowly blog, but there hasn't been much outside of work that I've concentrated on. I should be of better service to those few readers I have left as I assume I've lost most of you by now.

Among the irons I still have in the fire, the upcoming primary will shape up several races including a David Johnson running for the state house. Hmm...

Based on the Secretary of State's website, more Republican votes than Democrat votes were cast for Governor in 2010 in District 1 and, despite the stronghold of the Socialist Republic of Johnson County, in District 2. This should bring pause to Reps. Loebsack (Dist. 2) and Braley (Dist. 1)., with Loebsack facing a token primary challenger.

My District 1 Republican primary faces off Rod Blum and Ben Lange, who gave Braley a run for his money two years ago. I've listened to a couple of interviews with Mr Blum and I'm familiar with Mr Lange, who I spoke with at a gun show right before the 2010 election.

The editorial board, in our last meeting, suggested leaning toward Lange, but it was after a discussion concerning my blog performance, so I may have missed something.

The King v. Vilsack race should provide good comedy for the coming months while the Latham v. Boswell is uninteresting.

Now, back to the irons.
Posted by strandediniowa at 5:30 AM 1 comment: