I spent some time the past couple of weekends venting my frustrations on horse weeds, poison ivy and any other weeds that happened to grace the blades of the brushcutter.

The results of a few hours: 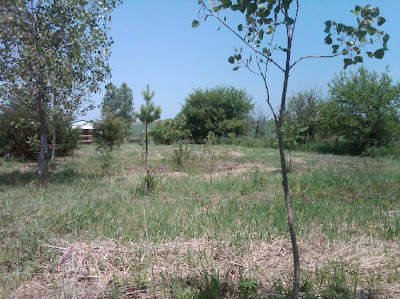 Looking north from under the cottonwood trees I discovered some more pines that were struggling for daylight, bringing the total to around 20. One of the taller white pines' lower branches were rubbed off by the deer and I replaced the small cages with a woven wire cages.

If I had run the mower through this, I would have mowed over the pines, some hackberry and small walnut trees. Using a hand brushcutter, I've been able to (for the most part) find the small 1-2 foot trees and save them. A few perished under the blades but it's hard to kill a walnut once it's rooted.

Number One son and I used hand sickles last fall and was able to clear off from under the cottonwoods in 8 hours. I cleared off twice the area in about three hours using a polycut blade on a Stihl FS55. I was really pushing the limits of that machine as I was asking allot from it but it did a good job. I've since added a larger weapon in the arsenal with a steel cutting blade and productivity has increased again.

Once cut, I sprayed this section with a mixture of broadleaf killer and insecticide to help control the ticks. It's below the pond so no worries of runoff to harm the fish. Not that we have to worry about runoff since it hasn't rained in almost three weeks and the forecast is spotty at best.

The lack of rain is taking its toll on the pond and hurt the hay, cutting into the yield. The maple seedlings have been struggling while the pin oak are doing okay as they had a chance to grow their deeper tap root. We've hauled water from our sand point at the homestead for the past two months to keep them going.

I really picked a good time start a tree farm...

We had a few discoveries, plenty of mistakes and a pleasant surprise or two this summer at Camp Stranded.
Posted by strandediniowa at 1:38 AM 2 comments:

I came up a little short 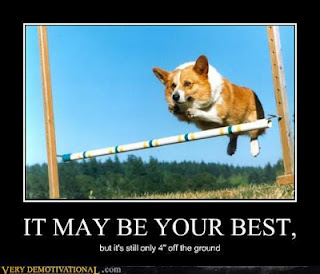 Posted by strandediniowa at 1:34 AM 2 comments:

Assault Veggie Ban in the works

After the recent assassination attempt on our Governor Branstad, State Senate leaders Mike Gronstal and Jack Kibbie announced the formation of a study committee whose focus is to make food safer for elected politicians.

"Its unfortunate that Republicans chose snacks that are choking hazards," remarked Gronstal. "President Bush choked on a pretzel, and now Governor Branstad had to be rushed to a hospital because of a carrot. I mean, [former] Governor Culver would never have chosen a healthy or salty snack item. He preferred something soft, like cake or ice cream."

Senator Kibbie added, "Until these assault snacks are removed from our grocers shelves, or at the very least, cooked thoroughly or pounded into mush, no elected Democrat would dare to indulge themselves on raw vegetables or salty and tasty snacks. That would also include Sterzings since the company isn't in my district and they're probably run by Republicans."

A Libertarian think-tank spokesman, Lee V. Mealone, decried the announcement, stating: "This is another attempt by state Democrats to meddle in people's lives. What's next, ban broccoli and cauliflower unless they are deep-fat fried? While everyone should enjoy them fried up on the specialty plate along side onion rings, I don't understand the reason to ban raw veggies. Iowans deserve the freedom to choose the crispiness of their foods."

Although the largest grocery chain in Iowa, HyVee, had no comment, previously stocked fresh produce sections were mysteriously depleted and many shoppers throughout the state noticed the missing orange roots. Miss Ida Grove commented, "I was checking out the Muscatine melons and I turned around and all of the carrots were gone. Now, you tell me what I'm supposed to shred up and put in my lime jello for the church pot luck. I don't think cabbage would be a good choice, do you?"

After a brief check up at a local hospital Governor Branstad returned to the USS Iowa where he was joining in the celebration of the USS Iowa becoming a floating museum at the harbor in San Pedro, CA.Visit her at the Pacific Battleship Center.

The editors here at BTR are glad no harm came to Gov. Branstad and would like to remind everyone that the above writing is an attempt at satire. But do visit the USS Iowa and the Pacific Battleship Center at the links above.
Posted by strandediniowa at 12:13 AM No comments: 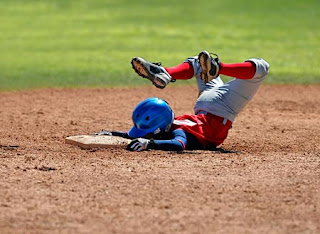 Similar to the unfortunate player above, the Stranded household is darn near flat on its face. With recent projects completed, I have a few lose ends to take care of at work and I can walk away knowing we made things better. A recent layoff of the Mrs. has thrown our budget for the year into chaos which caused a missed opportunity for a new piece of equipment for Stranded Tree Farm.

I have a Camp Stranded update that I'd like to share as soon as I get images off of the new camera. Being a Luddite at heart (causing a paradox because of my IT career choice) these things should be a bit easier. Or maybe I'm due for an upgrade?

Speaking of upgrades and my career, I rolled the dice a few weeks ago and I'm hoping for a little luck to shine my way. No - I wasn't one of the Powerball winners in Cedar Rapids, but I should be hearing something by the end of the week or mid-week at the latest. I'm optimistically pessimistic, or pessimistically optimistic, whichever the case. But Stranded is at a four-way stop and the direction I can go is up to others right now.

I'm hoping Friday will be a day of good news as I should be getting my brush cutter from the shop.

Oh, and maybe other news.

Saturday will be a day of celebration or disappointment. Either way some horse weeds will die.
Posted by strandediniowa at 12:54 AM No comments: