Gun giveaway brings out all the best hoplophobes

Iowa Gun Owners is having a gun giveaway and the vocabulary of the hoplophobes includes: "appalling", "irresponsible", and “We’re not in the Old West anymore. This is supposed to be a civilized country.” - Rep. Sharon Steckman, D-Mason City. The Des Moines Register has it all.

Not to be outdone, a talking mutton from the Coalition to Stop Gun Violence ignored the part in the announcement about obeying all gun laws, and lamented about the poor "child" who might win an AR-15: “Children clearly do not have the maturity necessary to handle rifles designed for use on the battlefield; and this type of flip, macho attitude about gun ownership is exactly how accidents happen,” [Ladd] Everitt said. Read the IGO announcement.

Since the giveaway can only go to a person that passes a background check, nobody under the age of 18 in Iowa would be able to receive the rifle. I guess that means the United States is sending "children" to the battlefield where they would actually handle fully automatic rifles, instead of the semi-automatics that are only allowed to be possessed in the state by mere citizens here in Iowa.

Good thing we have misinformed spokespeople from Washington, D.C. to straighten us out. We don't need them when we have nanny-state representatives at the statehouse.
Posted by strandediniowa at 3:30 AM No comments:

Coming up is the Marshalltown show at the Central Iowa Fairgrounds, March 7 - 9 (Maybe we will have a table this year)
Posted by strandediniowa at 9:21 PM No comments:


“There are people who are or do have lengthy criminal records that are coming in and filling out the paperwork and getting permits to get firearms, and the sheriff does not have discretion in Iowa anymore to deny those, other than a couple examples … (and) that includes sex offenders,” Pulkrabek said, citing Iowa’s shall-issue law, which went into effect in 2011.

That's bull and he knows it.

A "lengthy criminal history" absolutely prevents a person from getting a carry permit in the state.  Unless you define habitual speeding as a crime so heinous that it would prevent a person from getting a permit. The reporter just parroted the false impression that it's so easy for criminals to get carry permits but no word that the applicant has to pass a NICS check.

The carry law now prevents the discretion that county sheriffs used to enjoy which led to all sorts of political favoritism. Having the discretion taken away from Sheriff Pulkabrek chaps his hide. That and not enough training for private citizens.

Not one person on the panel of "experts" to speak about the defensive uses of firearms, so it's probably not a place one would find solutions. Unless the solution is to make it more difficult to obtain firearms or the end-game of taking yours away from you.
Posted by strandediniowa at 3:00 AM No comments:

If this study is true, then nearly all firearm owners should be dead by now

Another study that suggests you are more likely to be a victim of violence if you own firearms than if you don't have a gun in the home.

With no opportunity to have a control group, these kind of studies have no significance other than to provide academics a chance for grant money.

But don't compare the stated 31,000 firearm deaths per year with the number of accidental deaths due to medical errors (225,000).

Or the higher suicide rates in gun-banning Japan.

Or the benefits of firearm ownership.

But do state: "The researchers say restricting access may effectively prevent injury." But don't add that tools used in some of those injuries would statically be switched to knives, clubs, baseball bats, cars, etc.
Posted by strandediniowa at 3:00 AM No comments:

Silencers (and more) for Iowans

Legislation from last year has been updated and introduced into the Iowa House Judiciary subcommittee. Adding silencers to the definition of  "offensive weapons" here in Iowa.

The way I read this, is that it removes state restrictions and defers to federal laws.

More bills have been introduced and we will be keeping a eye on the golden-domed cesspool in Des Moines.
Posted by strandediniowa at 9:02 PM No comments: 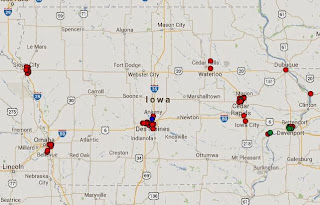 If the premise is about safety, wouldn't it make better sense to put them closer to schools and parks where children play.

One in Cedar Rapids is 5 blocks from a junior high for traffic driving away from the school.

Somewhere to go almost every weekend and lots of choices.