The first part is true, the second would have been if this had been the Koran: 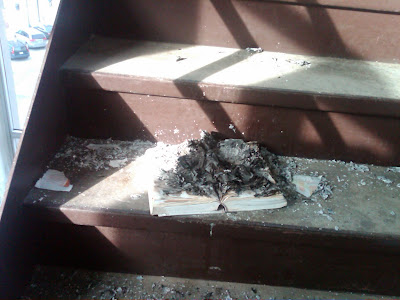 Discovered last week in a downtown parking garage in Cedar Rapids, the charred remains of a Bible sit in the stairwell to remind us of either the stupidity or the lack of morals of some in our public.

My guess is that a couple of punk kids did this as a stunt and not as a religious or political statement. Otherwise they would have picked a more open and well-traveled venue. The few visitors that actually use the stairs didn't raise the alarm of radical anti-religious acts being perpetrated in the peaceful little city of Cedar Rapids.

To my knowledge, no one called the TV stations or the local paper. It wasn't on Fox or CNN and nothing posted on Youtube. In other words: Protest Fail. (If that was their mission.)

Very few saw this (reminds me of this blog), so I ask: Why?

If not to bring attention to oneself or to one's cause, why perform such an act, especially in an obscure parking garage stairwell that lazy Americans rarely use? Was it in the hope that someone would do the work they should have by contacting KCRG, that way they can enjoy a snicker in the corner of their mother's basement in a self-congratulatory moment?

It was reported to be a "Teen Study Bible" so it wasn't much of a version anyway. They would have had more attention and howls of protest if the parking garage burned to the ground. That's America today.

If you are going to burn something in protest, take some advice from the masters: 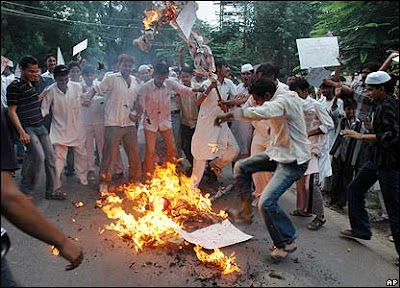 That way it would produce a huge counter protest: 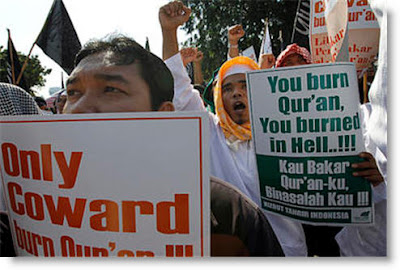 I will paraphrase the above sign, Only Coward[s] Burn the Bible.

Do it right next time.

Disclaimer: I didn't write this to give them attention but rather to bring another example of the contradiction between the Religion of Peace® and Christians in America. The Presbyterians didn't burn the mosque in Cedar Rapids, the Methodists burn Mohammad in effigy, and the Baptists didn't do what Baptists would do. Christians still wouldn't have had the mass "peaceful" protests even if this act had widespread publicity. Am I wrong?
Posted by strandediniowa at 5:50 AM