Statehouse shutdown. And the people rejoice!!!

Not exactly. But at least they didn't raise taxes today.

This afternoon, state representative, Ako Abdul-Samad (D-Des Moines) received a "threatening letter" that contained a unknown white substance. Hazmat teams were called in to clear things out, just in case.

While this is a serious matter, the cynical side of me has reservations regarding the incident.

And the Kabuki Theater entertains us all: 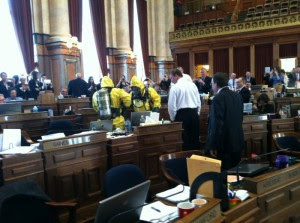 The hazmat teams arrived in protective suits while the representatives and staff kept a watchful eye on the proceedings.
Across the aisle, a state senator thought the response was unimpressive.

And then Senator Gronstal, as always, displays the decorum and dignity that worthy of his position:

“Don’t let those bastards in here. They’re House members for Christ’s sake,” Senate Majority Leader Michael Gronstal joked at around 5:45 p.m. as senators waited at their desks for further instructions from emergency officials.

"Joke" is the word I use for Gronstal all the time.
Posted by strandediniowa at 11:02 PM