The guns from Badger Guns

Kurt Hofmann has been keeping up on the Badger Guns Saga with another insightful post at Now, they want to make it harder to sell a gun store (Thanks for the link back) and sometimes I wonder if we are the only two guys left that don't want to throw the current owners under the bus.

I've got no dog in this fight and have never met the current or previous owners. The problem is when they vilify one gun store owner when they've done nothing illegal, they will go after them all pretty soon.

I missed a really nifty Flash animation from the Milwaukee Journal Sentinal Violation history at gun store and after clicking "Next" a few times I found this nugget towards the end: 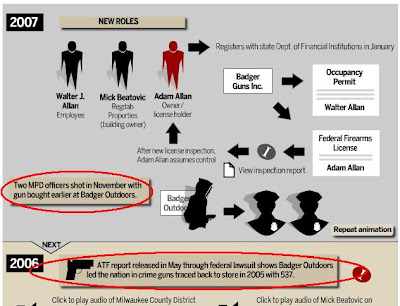 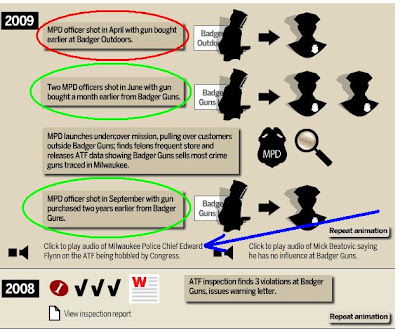 Be sure to go to the last frame and click on the interview with Milwaukee Police Chief Ed Flynn complaining that Congress is hampering ATF's efforts.

The Madison and Milwaukee politicians, police chiefs, and newspapers have been wailing for months to shut down Badger Guns, all the while the crime guns overwhelmingly were purchased from the previous owners. By this report, only two guns purchased under current ownership were used in the police shootings.

By that standard they would shut down Walmart, but then maybe that's the idea.

Update - ATF actually follows the law... someone else is paying attention to Badger Guns.
Posted by strandediniowa at 7:57 PM