ATF agent threatens to sic a private investigator on Grassley

To dig up some dirt apparently.

For all of my disagreements with the Senator, I would never think he had any dirt on him. (Harkin, on the other hand...) I believe Senator Grassley to be an honorable man despite his occupation as a US Senator.

Gun dealer Andre Howard recorded conversations with ATF agent Hope McAllister and they reveal the extend the ATF agent would go if she had the means to do so.

Agent: That's kind of what my suggestion but nobody thought that was funny like if I were a P.I. I'd put him on Grassley, I'm sure there's a lot would go away. Actually my one suggestion was just tell him in a registered Republican. I'm sure if he knew that everything would be fine, they didn't like that either.

Grassley may have some skeletons in the closet like this photo: 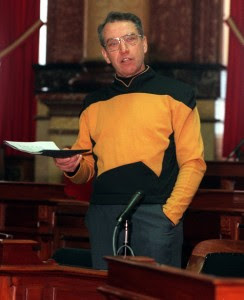 But I highly doubt he has anything that would rival the Clintons or any of the Kennedys. I don't they fully know many of the members of the Senate, although they pegged Leahy pretty well.

They have a good understanding of the situation in the Senate. Since the Republicans are in the minority, Grassley is powerless to do any real investigations. He can't call for hearings and is limited on any subpena power.

Simon Conway of WHO radio interviewed Senator Grassley last week on this very subject. (Start at 9:09) I apologize but the embed doesn't want to work for me.

It would seem that Chuck isn't going to let "Fast and Furious"\"Gunwalker" go away.
Posted by strandediniowa at 5:00 AM

Not regarding the story itself, but from the photo I figure he was a very big Star Trek/Captain Kirk fan.