After the recent ban decree at our state fairgrounds, Jim over at Travis McGee Reader informed me of Woodbury County's ban. It seems that the county supervisors are afraid since they referred to the Arizona attack on Congresswoman Giffords.

After defeating a complete ban on all county property, such as parks or recreation areas, the supervisors banned weapons in the County Courthouse, law enforcement center/jail, Trosper Hoyt Building and Prairie Hills.

The resolution said the county was seeking to perform the role of protecting the "peace, safety, health, welfare, comfort and convenience of its residents" and county property.

So government entities are responsible for the "comfort and convenience" of its citizens? What the French?

I plan on moving to Sioux City so the county can buy me a Lazy Boy rocker and bigass Tee Vee.

Uh, no. I got my own comfort covered, thank you. 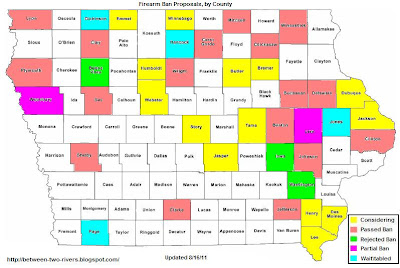 I thought the silly season was over since news reports of cities and counties banning weapons dried up since April, but here we go with another round of "we're in charge" passing a law or resolution because they have to do something to protect the poor citizenry from guns.

Jim graciously stated that, "The best place to track these local gun banners is over at Stranded in Iowa's place."

It's because fellow Iowans like Jim at Travis McGee Reader, Ben at Cold Hard Cashner and others have given me tips.
Posted by strandediniowa at 5:54 AM