Don't mess with a mom

Police: Man Tries To Entice Teen, Gets Punched By Mom 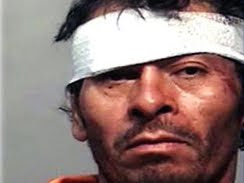 "I got down to the alley and I confronted him. I said, 'Why are you staring at the kids?' and he looks at me and says, 'I want to marry the red head,' I came unglued at that point. I was like 'Dude, she's only 13 that's my daughter,'" said [Holly] Pullen.

Looks like he got served up a can of whoop-ass and deservedly so.
Posted by strandediniowa at 5:28 AM