Navy Seal, Jon Tumilson, who perished in the rocket attack near Kabul, Afghanistan, was laid to rest last week. His lab, Hawkeye, walked to the casket, let out a sigh and laid down near his fallen master.

Tumilson’s Labrador retriever, Hawkeye, was photographed lying by Tumilson’s casket in a heart-wrenching image taken at the funeral service in Tumilson’s hometown of Rockford, Iowa, earlier this week. Hawkeye walked up to the casket at the beginning of the service and then dropped down with a heaving sigh as about 1,500 mourners witnessed a dog accompanying his master until the end, reported CBS.

A dog's devotion that was expressed in a final moment of closure. 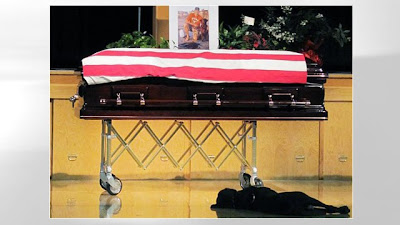 Tumilson's family has started a memorial fund and contributions can be made to Frogman 238 Memorial Fund, First Security Bank and Trust, 201 West Main Ave., Rockford, IA 50468.

My hope is that Petty Officer Tumilson's family will find comfort in these coming days.
Posted by strandediniowa at 5:15 AM