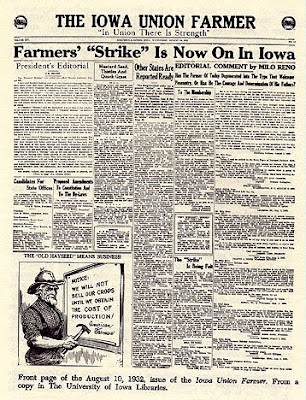 For years, Short had been one of lowa's colorful and controversial figures. His opposition to prohibition and the Woodbury County Anti-Saloon League cost him a prestigious pulpit at First Congregational Church in Sioux City. Several years later, he astounded western Iowa conservatives by winning the mayoralty at the head of a labor ticket. He attracted national attention by defending the free speech rights of the Industrial Workers of the World (IWW) and by delivering, in April 1919, a daring address before a convention of "wobblies" held in the Missouri River community -- which nearly resulted in his dismissal as mayor in a heated recall election. In 1921, while still mayor, he preached the funeral sermon of an Islamic packinghouse striker who had shot the son of the county sheriff and was killed in turn; and he was one of the few Iowa public officials who, during the zenith of their power, openly attacked the Ku Klux Klan, whom he described as "jackals who hunt in packs under cover of night." [1] Sioux City Journal, September 14, 1923.

In August, 1932 about 1500 farmers prevented milk producers from reaching Roberts Dairy processors in Sioux City. By September, Governor Turner threatened to mobilize the National Guard, which produced the desired results of breaking the blockade. The this account and others I've read, the strike and blockade very nearly turned violent.

This fellow reminds me of another guy from the Sioux City area: Bob Vander Plaats.
Posted by strandediniowa at 6:05 AM