The War on Agriculture, part two

Reflecting on my previous post on the child labor regulations from the Department of Labor and their impact on the "traditional" family farms, I remember my experiences of hard work, long hours and the trials and tribulations growing up.

My first chore was at age 5 when I was tasked to gather eggs. I didn't wear a mask digging around in the straw and battling possessive hens. And at age 8, my job was to feed and water the feeder calves. I bet I didn't weigh 60 lbs when I lugged the corn and milo mix while fighting the calves to get to the feed bunk.

At 14 my dad put me in charge of 20 acres. What and when to plant and we cultivated back then, too. I paid enough attention that I knew about crop rotation and Dad agreed with my decisions. I didn't run the combine in the fall, but everything else was up to me, including the expenses. And a profit was made that year that was shared with Dad because the real world worked that way.

I later came to realize that I benefited greatly from my work experiences as a young-un. These new rules, while exempting "family farms" (for now) would have prevented that type of work, if those rules had been in place then.

Lauren Ritchie shared her experiences growing up as she explains in her commentary. One thing I didn't think of:

Theoretically, kids could continue to do whatever they want on farms owned by their parents. Some 1.3 million young people under 20 live on farms in the United States.

But nearly all "family farms" are incorporated today, just as most small businesses are, which would put them back under these proposed rules.

Exactly. These rules will hit almost every farm in the US, maybe not at first, but selective enforcement would compel everyone else to fall in line.

A press release stated: "The Department is committed to helping youth enjoy positive and challenging work experiences — both in agricultural and nonagricultural employment — that are so important to their development and transition to adulthood."

One safety advocate called the proposal "timid." My word would be "clueless."

This is not a case of banning thoughtless 13-year-olds from racing Jet Skis on public waterways packed with partygoers on the Fourth of July. That's called common sense. Rather, these rules would apply to what legal activities parents choose to allow their children to participate in while on private property. There is no risk to the general public.

For some reason the Labor Department and a whole lot of nanny-state interventionists, would rather a kid waste their time playing video games than learning about responsibility, resourcefulness, and a damn fine work ethic. 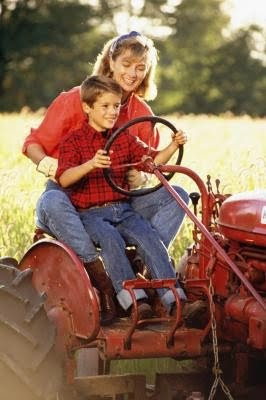 Wipe that smile off your face, kid. Don't you know you're being exploited?
Regarding the regulations, Rep. James Lankford, R-Oklahoma City:

"Some of these things are downright silly."

"It varies greatly. For instance, if a grandfather owned a farm and his grandchildren came to work there, they wouldn't be exempted under the rule. Their own kids on their own family farm would be exempted, but their grandkids would not," he said.

Leaving wide open the interpretation of the regulations up to some bureaucrat has worked out so well for every other federal and state agency, hasn't it?

Two things that angered me on this:

One - the feds thinking they have the authority to do this under the Interstate Commerce clause.

Two - I'm angry at myself for not knowing about this ahead of time. According to the last link, only 4000 comments were taken. There should have been 100 times that many but no one knew about this. Or at the very least, they thought this will only apply to the Big Ag operations and not them.

It might but I'm not going to bet on it.

Remember, we are all Kulaks now.

The government, the planners, the leaders who directed the robbery, even the government employees themselves "knew better than the peasants how they should live, and what they should sow and when they should plough."

Posted by strandediniowa at 5:16 AM

I would not have believed, when I was a young man in the 1980s, that I would would live in a state rapidly coming to resemble the unlamented USSR.