I must be crazy (or stupid)

I hadn't had an official time off from my work since I started there in May of 2009. All that changed this week (sort of) as I decided to take a few days off for a "vacation." (I still answer emails and log in to do requests.)

Did we go to Disneyland? - No

The Riviera or a Caribbean cruise? Nope

This Iowa boy decided to put some work into Camp Stranded and build a small storage shed. The crazy part being that I picked the hottest time of the year to do this which has turned into a corn-belt weight reduction plan. Better than Jenny Craig! 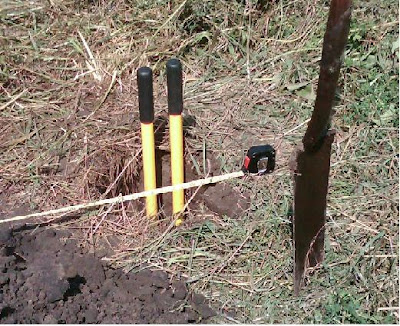 Tools of the trade.
Nothing fancy since I've don't have the skill set of a professional carpenter and nothing big since I don't have the tools required.

But a couple of mistakes: being an inch and a half longer than I first measured and I had to dig a hole twice. But it wouldn't be a Certified Stranded-In-Iowa fiasco without something going wrong.

Progress has been slow, what with the heat, humidity and general lack of knowledge of what I'm doing. That's really hampering productivity.

A positive since we started working on the acreage has been the Tick Twisters recommended by True Blue Sam. These things work because DEET doesn't repel them all.

One thing that has been nagging at me is whether we did the right thing getting this piece of ground. Equipment issues, can we afford it, etc...

But when my son and I stood over-looking the pond and felt the cool breeze while we watch swallows skim the water feeding off insects, for that brief moment in time, I think of nothing. No work, economy, statehouse bills... I'm at that point in time appreciating the variety of nature while trying to identify the different bird calls or remembering the name of a particular weed species. (Funny how I used to know that stuff long ago.)

That's when I become re-convinced that it we did something right.
Posted by strandediniowa at 5:18 AM

(clap-clap) Creating a homestead begins with a stoage shed. A place to organize tools out of the weather makes every ensuing labor go easier.

The humid heat is slowing us down up here, too. I've suspended all wood splitting, and even riding the mower seems like hard work

30 years ago, I used to work all day in the heat baling hay, but dang if I'm not becoming a wuss in my old age (just turned 48).

1.5 pints of water per hole was my rate. What started out at 45 minutes to dig a hole, ended up at about an hour towards the end.

Once the shed is built, then a small "cabin" nearer the pond is in the planning stage.

But that's for a later time after I recover.