Sweatin' to the oldies

Old memories, that is... 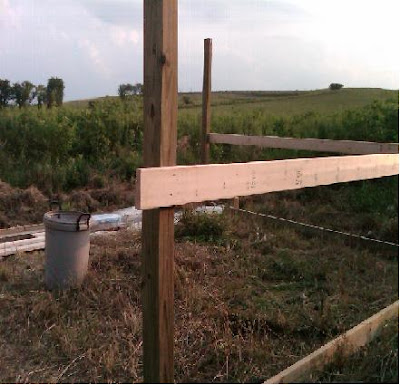 Tamping the dirt back into the post holes reminded me of when we built fence at my grandfather's farm in Henry county when I was in my early teens. He had a knack for tamping all of the dirt back into the hole regardless of the size of the post. Using a hedge pole, he tamped so well that most of the time we could have put more dirt in.

I'm not that good.

The cicadas calling and red-wing blackbirds song bring back a flood of memories from that farm and the summers I spent there building fence, cultivating or baling hay. I also worked for a neighbor of his and I miss that character.

Nostalgia lane has been interrupted with my work Blackberry chirping at me with another request (even though I'm supposed to have time off) and I've been tempted to throw it into the pond. But then I would have missed my boss thanking a coworker for something I found and a few other curious happenings in my absence.

With the progress we made this week (albeit slow), I recalled the one compliment that my father shared with me. He told me I would have made a good farmer.

Even as a part-time farmer, I hope I can be a good one.
Posted by strandediniowa at 6:01 AM

I always blame leftover dirt on the Moon being in the wrong sign.

Hmm, I may give that some thought, Sam.

My father-in-law lived by signs of the moon and did not appreciate my lack of faith.

One year my dad was getting ready to plant potatoes and a neighbor told him it was the wrong sign. Dad replied that three signs pointed to plant potatoes that day: the ground was ready, the potatoes were cut and the help was there to plant. He claimed that was his best yield that year.