We should trust Kagan's words, right?

With her hearings winding down, Elena Kagan is poised to join the Supreme Court. An inexperienced jurist (considering everyone with a high school education should understand the Constitution, that isn't normally a disqualifier) and a known political hack will replace another retiring political hack on the bench.

My pessimistic nature always takes hold after working more hours than I care to. For those who rejoiced over the recent McDonald ruling, relying on the courts to define our rights is dangerous foreplay leading to tyranny.

Consider the words from then nominee Sotomayer and now justice Sotomayer:

But despite her past decisions, Sotomayor clearly promised the Senate Judiciary Committee that as a Supreme Court justice she would follow Heller and accept its decision that the Second Amendment guarantees an individual right to own guns for self-defense. Here's this example from her 2009 confirmation hearing:

Senator Patrick Leahy: “. . . you, in fact, recognized the Supreme Court decided in ‘Heller’ that the personal right to bear arms is guaranteed by the Second Amendment of the Constitution against federal law restrictions. Is that correct?

Yet, in the Supreme Court’s decision on Monday to strike down the Chicago handgun ban, Sotomayor apparently completely forgot her promise last year. She completely signed on to Justice Breyer's claim:

I can find nothing in the Second Amendment’s text, history, or underlying rationale that could warrant characterizing it as 'fundamental' insofar as it seeks to protect the keeping and bearing of arms for private self-defense purposes.

She either lied in '09, is ignorant of history or judicial rulings, or she's a complete moron. Look at the Dred Scott case, the Federalist Papers, or any of the founders' writings from Madison to Mason. She couldn't even look at Heller.

Can we trust Kagan after Sotomayer's hollow words?

What would've happened if the 5-4 vote in McDonald went the other way?

It would not surprise me that someday the court will rule that the 2nd Amendment is unconstitutional. A few more "intellectuals" on the bench, and we will get that ruling.

The Paradigm of the ruling class is clearly opposite of the common citizen at this point in our nation's history. As such we are at a crossroads where one path leads to a re-awakening of our liberties and the other leads to an oppressed citizenry on its way to the gulags.

Broken chains at the feet of the Statue of Liberty: 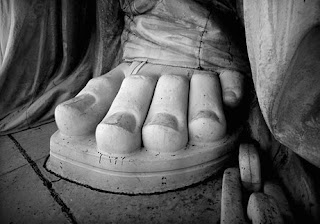 Chains of bondage, or a symbol of freedom?

"We defend freedom here or it is gone. There is no place to run, only to make a stand. And if we fail, I think we face telling our children, and our children's children, what it was we found more precious than freedom. Because I am sure someday -- if we fail in this -- there will be a generation that will ask.""
--Ronald Reagan

Posted by strandediniowa at 7:02 AM

If we get that ruling, and we don't go to war with all three branches then, we deserve the coming slavery.