What could be a better function of government than to confiscate tax money from some individuals, and invest that money in worthy projects.

Our last governor seemed to think that putting up a bunch of signs throughout the state to advertise his using state money to "stimulate" the economy was a great idea. Especially when state funds were used to put up signs with his name on it. Free campaign signs and it costs the state to take them down. (The Democrats in the statehouse are currently arguing that taking these signs down would cost the state money we can't afford. Who would have thought they were fiscal conservative?)

I found one such sign last week in Belle Plaine. Take a look and see if you can see what I see. 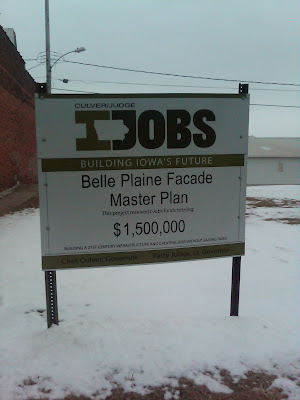 I appreciate the slogan "Building a 21st Century infrastructure and creating jobs without raising taxes" hogwash.

Do you see what I see? Or rather not see?

The empty lot behind a sign with the word Facade.
This aptly describes the whole I-Jobs fiasco. The sign is more important than the project. But on the other hand the sign is true.

Thanks, Chester for spending $1.5 million dollars of our tax money without raising taxes. Putting our state in a hole that will take years to dig out of.

Thanks for the laugh, too. But I don't think I got my money's worth out of it.
Posted by strandediniowa at 5:52 AM