Big shooter in a small package

When someone thinks of the term, "bring enough gun," most of us would think that it applies to a gun fight or the battlefield. Some of us would think that term would apply to the gun one carries for defense. But what kind of gun would one use for home defense? Most often (and at the Two Rivers Lodge) a 12 gauge is quite handy.

Our good friend, True Blue Sam, hands us a story of one woman who has taken the idea of "bring enough gun" to heart.

Most folks find it surprising that that True Blue Sam's 110 pound mother shoots a big bore revolver until they give it a try, then, of course, they want one, too. It is a joy to shoot! How does a grandmother who never shot a pistol before make the leap to a .45 that could hang on Marshall Dillon's hip?

He's talking about his mother, Bea, who uses a Ruger Blackhawk .45 Convertible for her home defense. 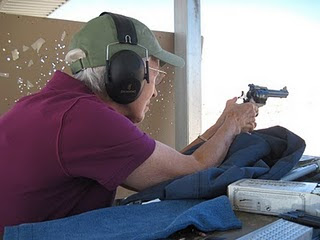 Although her carry gun would be her Walther PK380, Sam says Bea is "passionate" about her .45. She enjoys that Ruger so much, she wants to share one with another gunner "soulmate."

Sam announced the Gun Blogger Rendezvous VI and something extra.

She has had the time of her life at the Rendezvous, and she wants to give even more to the event to help Project Valour-IT, so she decided to purchase a Convertible Blackhawk to be raffled off at GBR VI next September. Lori Petoske, and Ken Jorgensen of Ruger have made arrangements with Bea to provide a certificate for a new Ruger Blackhawk .45 Convertible to one lucky person at the Rendezvous this year 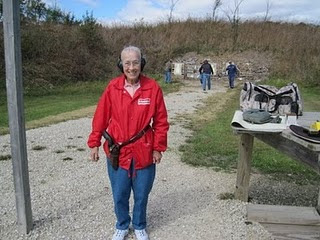 All smiles after her range time to qualify for her Iowa Carry Permit. She sent 100 rounds downrange that day.

The .45 Blackhawk was the biggest gun in the class, and Mom had instant street cred when she strapped it on. There were some .38's, some .40's, and one fellow brought a .22.

That's Bea with a "Big Iron" on her hip.

I hope you didn't get lost with all of the links and if you made it this far, thank you. I thought that I would honor Bea as she is an inspiration to those of us who are not large in size. Breaking the mold of the stereotypical diminutive woman, she even has my wife thinking of "bringing more gun".

Her generosity is also to be commended for her donation at the Gun Blogger Rendezvous VI for the Ruger Blackhawk.

I asked my wife if she wanted to go to Reno with me next fall. (If I sell some inventory, cash in a couple of things, we might be able to go, maybe???)
Posted by strandediniowa at 5:46 AM

Bea and and my dad, Dwain, had the Gunfighter Ballads album by Marty Robbins, and we listened to it many times when I was a kid. Mom really likes that song. We are both fired up and can hardly wait for the Rendezvous! We hope you can be there.

I can't tell if I'll be able to make it. I have several things in the works right now and it depends on what happens in the next couple of months.