Condescending police chief thinks people are too stupid to own guns

Just because you have a gun doesn't mean you know how to use it. Or one can imply that from the words of Marion Police Chief Daugherty.

“They have a right to their opinion, but my way of thinking is a little different. The more guns you have out in the streets, the more chances of an accident happening. It’s just common sense. They’re getting handled by more people, so the percentage of accidents have to go up. They just can’t go down.”

“All these people are getting these weapons and they may not know how to load them,” he said.

The clairvoyant chief believes that a sticker at your place of business will magically prevent someone from bringing a firearm in. Businesses could expect to never have an armed robbery.

The arrogant top cop at Marion is out asking businesses to place magic stickers at their entrances; spending department money (confiscated through forfeiture laws) on a letter campaign and creation of these magic stickers: 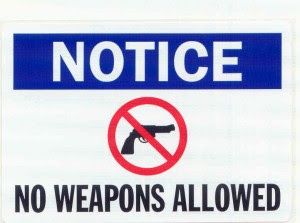 Sean McClanahan has more and a copy of the letter.

The Iowa Conservative Union is accusing the chief of "...taking a political position on Iowa’s gun permit policy—and using public money to do it."

Conklin [of Iowa Conservative Union] said his group will urge 2nd amendment supporters to avoid any Marion business posting the “gun ban” notices sent out by the chief. At least one business owner said the idea of making some customers unhappy might give her pause and keep her from using the stickers.

Posted by strandediniowa at 6:15 AM

Here's the real message the stores need to post.

I didn't make the original drawing, but I edited the text. That's what they are saying. Because it isn't the Chief or his men that will be disarmed, is it?

Crotalus (Dont Tread on Me) said...

This, from a chief of the group that shoots the wrong person at a five to one ratio compared to the armed citizen.

He's promoting an agenda, plain and simple. For him to say that he's just informing the business owners is a farce. The hoplophobes have the airwaves, letters to the editor city and county boards.

Of course this is Marion (speed trap) Iowa, too.