Late night database upgrade has left me with little sleep. 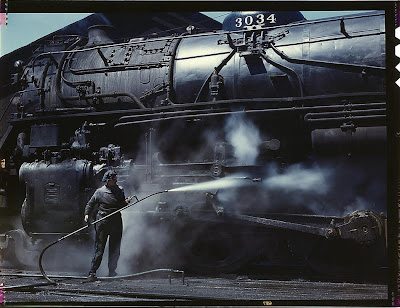 Mrs. Viola Sievers, one of the wipers at the roundhouse giving a giant "H" class locomotive a bath of live steam. Clinton, Iowa, April 1943. Reproduction from color slide. Photo by Jack Delano. Prints and Photographs Division, Library of Congress

Found at The Freeholder

Another example of the war-time necessity of asking women to do a "man's job". Although a job on the railroad could have been considered as a draft deferment, my dad left his switchman's position at the time and entered the war.

After the draft board caught up with him.
Posted by strandediniowa at 11:49 AM

Labels: out of steam