About 150 people gathered near Steamboat Rock, Iowa On Saturday, June 19th, at a picnic sponsored by Iowa Gun Owners. A broad representation from across the state were in attendance and participated at the handgun and rifle range followed by a traditional cookout of burgers and hotdogs. Capping off the day was a short speech by Thomas Moore, representative for firearms maker Fabrique Nationale Herstal.

My wife and I enjoyed meeting other IGO members from across the state, some of whom we had more in common than just guns. (Knitting for example - my wife, not I). A few candidates for state offices worked the crowd and were acknowledged by Aaron Dorr, Executive Director of Iowa Gun Owners. While this might have been a day for politics, none were given a chance at the microphone.

At the firing line: 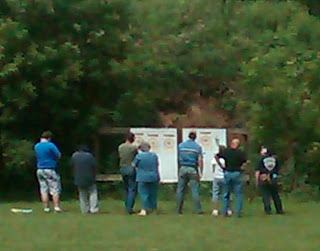 Experienced and new shooters were given a chance at both handguns and rifles. Some of us brought our own weapons of choice and I got a chance to show my CZ pistol, while examining a couple of handguns that other members brought. On the handgun line, there was a choice of mostly Glocks and a couple of Ruger pistols for those who did not bring their own. I had the opportunity to shoot a Glock 23 for the first time and shot low.

Aaron Dorr (with sunglasses) at the handgun table: 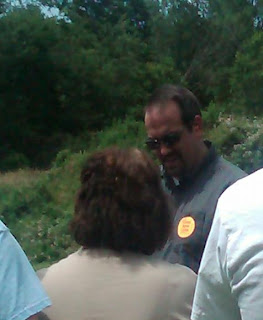 Waiting for the food, State Senate candidate, Kent Sorenson (with sunglasses on his head), speaks to voters from his district: 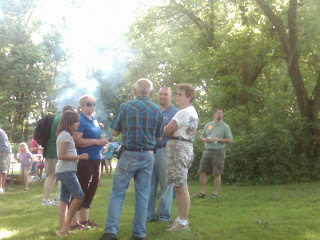 I didn't get Mr. Moore's picture, because I was trying to pay attention to his words. He presented his views of gun right struggle from a national and international perspective. One thought is that the liberal left, both nationally and abroad, do not understand the proper perspective of the 2nd Amendment. It's that they have such a different world view that they cannot see it from our side.

He cautioned us not to spread rumors as this harms the message that we are trying to get out. One such rumor is in regards to international arms treaties and jumping to conclusions of its power at the UN. It's not say that a treaty is not in the works as he told us to be vigilant.

Mr. Moore also encouraged the crowd by stating that the gun right struggle in Iowa was headed in the right direction and he didn't see that we were wrong in our approach. A word of advice was to use the left's tactics against them and to study Marx's dialectic and the writings of Saul Alinksy. A "know your enemy" approach to politics.

There are some expectations for the upcoming election and it looks like IGO is becoming a force within Iowa politics. This did not come from Aaron, but from my conversations with some of the candidates for office. There hadn't been much forward movement for gun rights in the state until that last couple of years and they attributed it to IGO.

My wife and I got to meet several people for the first time and we got a chance to fire weapons we had never held before. Guns, Politics and the potato salad was pretty good, too. Not a bad way to spend a day. (My apologies for the poor quality of pictures)
Posted by strandediniowa at 12:54 PM