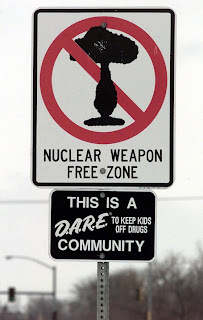 In one of the best examples of irrelevant, do-nothing action, years ago signs went up around Iowa City declaring it a "Nuclear Weapon Free Zone".

A city ordinance, which Gazette archives say was approved in 1985, establishes “the city as a nuclear weapons free zone in which work on nuclear weapons is prohibited. The people of the city find that the presence of nuclear weapons facilities within the city is in direct conflict with the maintenance of the community’s public health, safety, morals, economic well being and general welfare.” Interim City Manager Dale Helling, in a memo to the City Council Monday, said most of the street signs have disappeared or been subject to vandalism over time.

Duh. Because those signs are a joke to anyone who notices them. And what government agency has any authority regarding morals? And face it, Iowa City and "morals"? That's a joke right there. (I better not judge, lest I be judged, right?) Will a sign prevent anyone from hauling a nuke (if he had one) or a dirty bomb and lighting one off outside of Kinnick Stadium? I doubt it. Read more at Iowa City just says no to nuclear weapons
Posted by strandediniowa at 10:40 PM