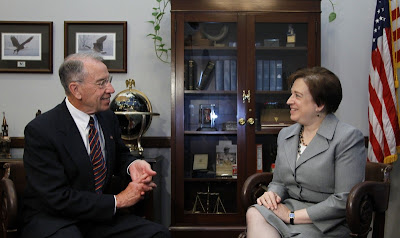 “[I] don’t know if amending [RICO] to include gun offenses would be smart or stupid as a matter of politics — or as a matter of policy — but it definitely is an option,” Kagan wrote. Short for Racketeer Influenced and Corrupt Organizations Act, RICO was originally enacted in the 1970s to combat organized crime.

More and more of this partisan nominee is revealed each day.

With Grassley's smile, I'm beginning to wonder if he would vote against her.
Posted by strandediniowa at 7:02 PM