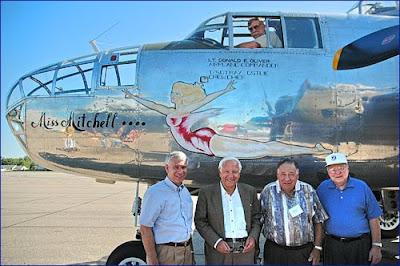 MUSCATINE, Iowa (AP) — A restored World War II-era B-25 bomber aircraft that was flying to Minnesota was forced to make a stop at Iowa’s Muscatine Municipal Airport because of a mechanical problem.

Pilot Alan Miller said Monday that he had to stop Sunday evening to shut down one of the aircraft’s two engines. The silver aircraft is named “Miss Mitchell” and it flew more than 135 missions over North Africa and Italy during the war. It took 12 years to restore and returned to the air in 1992.

You can arrange a ride on "Miss Mitchell" at Miss Mitchell History Rides
Posted by strandediniowa at 9:06 PM