Iowa isn't the only place where putting up a billboard will get you into trouble. A Grand Junction business owner received death threats over his connection with this sign: "He got a lot of calls out of his place of business that he said he was fine with. When things got out of hand and people started calling his wife, that's when he decided to go ahead and take it down," says Blake Brueggeman, owner of Integrity Auto Repair. Brueggeman leases property from the billboard owner.

The sign's artist says it's meant to convey a message. It showed President Obama as a terrorist, gangster, Mexican bandito and a homosexual. "It's got a lot of symbolism in it, in that all of those characters are issues being mishandled by presidency," says creator of the sign, artist Paul Snover.

Ah, the lost art of political satire. It's death is coming soon.

A comment that Concerned American left here during the Obama/Hitler/Lenin billboard "controversy":

A bad thing....once bullies have measured you (including the Repubs who shout and then apologize) and found you to be weak, they'll take everything from you, including your ribcage. 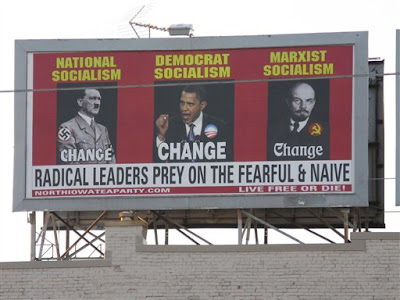 Posted by strandediniowa at 10:10 AM