I am TJIC as well

I've written my share of words that some would find offensive, I've lobbed a few names towards the political class. But when one's words are interpreted as a threat to those in power and action taken against the writer, where does the 1st Amendment protections end? The threat was inferred, not overt. As a consequence, the writer loses his guns.

Borepatch recognizes the chilling affect that this has on free speech. Hell, if a urine filled jar with a crucifix is considered free speech (boorish, yes - offensive, absolutely) then why isn't an offensive remark written on a blog protected as well?

But this is, as JayG points out, an attack not only on the First Amendment, but on the Second as well. An attack of this sort - groundless in logic, and arguably mendacious in nature - is an attack on all. And so I have to stand with TJIC.

And this is born: 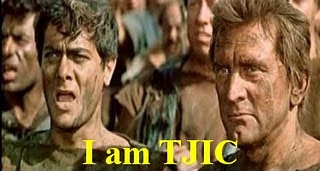 Random Acts of Patriotism adds to this as well:

You don't have free speech when it's only the speech that makes people comfortable. Dr. Martin Luther King said many things that made people uncomfortable, and we just celebrated a national holiday in his honor. Patrick Henry made a speech I remember from school, although I bet it doesn't get taught much anymore, it would make people very uncomfortable. You don't have to like Mr. Corcoran's writing, you don't have to agree with him, or me, or anyone in particular. You just have to understand that your right to do and say things you think in a free and open way is inextricably tied to everyone else's right to do the same.

The author may have shown a lack of wisdom by writing it, I'm not going to judge him on that. What authorities have shown is that selective enforcement of "offensive" speech effectively quashes anyone else from speaking as well. Only "approved" speak will be allowed and nothing outside of this will be tolerated.

If the ACLU or those on either side of the political spectrum don't unite to denounce and correct the actions of the authorities, then they set themselves up. For when their particular ox is being gored, who will stand for them? The precedent would already have been cast in stone.

These tools can be used against any non-approved speech at any time. Against anyone. Left, Right, Middle. Only the Power of the State would prevail.

Let's hope that the time does not come when only milquetoast opinions are produced by mediocre minds. When reason and true arguments between countering viewpoints no longer are expressed with vigor and enthusiasm. When fear of offending others overrule free-will expression of thoughts. When one loses their rights because of an interpretation of what the authorities thought they wrote, then all speech is threatened.

Further thoughts - This is conditioning our society to accept a loss of rights (1st, 2nd, 4th, etc) without due process. On the basis of an accusation. Sure one should expect a loss of liberty when charged with a crime, our jails are filled with people accused of a crime. But what this amounts to is this: you wrote something that could be perceived as a threat, therefore we take your rights away. This could happen to me, to you or to someone you know.

The other point is that there have been many not-so-veiled threats from the left side of the political spectrum and nothing is done. Hell, Bill Ayers still hasn't been held accountable for his actions. Yes, actions. He didn't just make threats he acted on them. Jail time? No.

TJIC, we hardly knew ye. But I'll stand up as well.

I may not count for much, but count me in guys.
Posted by strandediniowa at 6:13 AM

Thanks for your support!

Well said. I would not have written what TJIC wrote, but I agree, his right to say things, even if offensive, is what is protected.