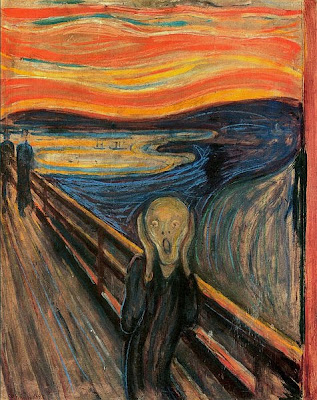 This Edvard Munch painting is a very good depiction of fear in the minds of someone who is deranged. I think using it for hoplophobia is apt.

For instance, Davenport's mayor and his proposal to have uniformed police at city council meetings.

And the Des Moines Register full throated promotion of fear:

Still, it's frightening. It's especially frightening because we live in a country with millions of guns. Many people - including teenagers - have easy access to them. A young person bringing a gun to school may not be uncommon.

One could infer from their writing that with more permits, more guns would be carried to schools.

Considering that current law prohibits guns in schools, and prohibits a minor from possession of a handgun outside of adult supervision, their bed-wetting seems a little off base.

But we have to do something! Pass another law!

As for the school, having a policy magically creates an environment where nothing bad happens. The "No Weapons" policy should have prevented the student from bringing in the weapon. Just as the "No Bullying" policy is in place and no one is ever picked on ever again.

Back to reality, making it harder for citizens to protect themselves and family, has not solved violence from occurring. Where gun laws are restrictive, it actively creates a violent environment. johnlott.org
Posted by strandediniowa at 12:06 PM