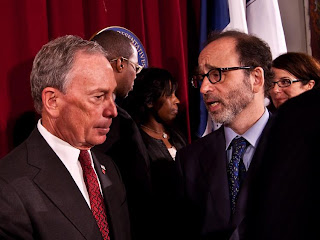 Mayor Bloomberg (and his cohorts, Gillibrand, McCarthy and every mayor from his Mayors against guns group) are wrong about the terror watch list. They demand using that list as part of the NICS check. From his op ed Enabling the next Fort Hood?

The Tiahrt amendments passed by Congress interfere with preserving, sharing and investigating data on gun purchases by terrorist suspects. If that weren't bad enough, Congress has also failed to close a gap in federal law that prevents the FBI from blocking a sale to an individual under investigation for terrorist activity.

As the holiday travel season rolls around again, the government’s terrorism watch list and no-fly list get ever more bizarre. Of course, for starters, the list has always been unconstitutional, because the government does not have probable cause to believe the vast majority of those on the list have committed a crime (otherwise they could arrest them outright instead of just banning them from flying on airplanes).

The FBI’s terrorism watch list, from which the smaller no fly-list is derived, has 1,000,000 people listed, but according to officials, only a mere 400,000 of them are real people—the rest are aliases. Whew, I was getting worried there for an instant. Wait a minute, 400,000 is still a whopping number. An amazing 1,600 people are added to the terrorism list per day, merely on the much lower standard that they present “reasonable suspicion” of being terrorists. The list has been widely criticized for the tenuous and unclear links to terrorism of names included and the numerous cases of mistaken identities. Even the Justice Department’s inspector general noted that 24,000 people were included on the basis of irrelevant or outdated information.

Posted by strandediniowa at 8:23 PM