Jumping on the cash cow:

The Muscatine City Council unanimously approved the first reading of an ordinance Thursday that would allow cameras at key intersections to cite speeders and those who run red lights.

The vote was 6-0, with Councilman Bob Bynum absent.

Police Chief Gary Coderoni said the police chiefs he's talked to in communities that have tried an automated system said that relatively high levels of citations immediately after the cameras are installed fell off rather dramatically in the months following.

"They might become irrelevant," he said of the cameras.

To which Kosina [of Gatso] responded, smiling: "We recommend you leave the pole up as a deterrent."

Isn't living in a surveillance-state funny?

And not to be outdone by Cedar Rapids, Waterloo and Cedar Falls are looking for additional revenue:

The city is entertaining plans for cameras to catch and ticket speeding motorists and those running red lights.

The Waterloo Courier called this a "sales pitch" and that's exactly what Gatso does.

Looking back to 2007 our legislature tried to prohibit cities from putting up these revenue-generating slot machines. The effort failed in the House. From this article: House removes provision to ban red light cameras

House lawmakers voted 56-27 to strip a provision from a massive transportation bill that would have prohibited the use of cameras to catch lawbreaking drivers. The House changed course just days after the Senate voted in favor of a ban.

"What's a ticket? Twenty dollars? Fifty dollars? It slows them down and makes them think," said Rep. Roger Thomas, D-Elkader, a paramedic who has responded to scores of traffic accidents. 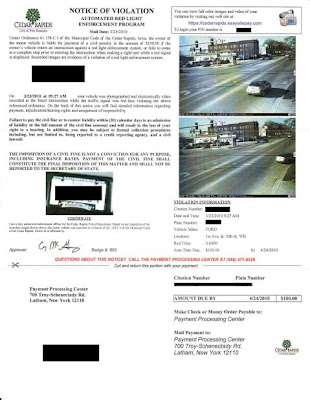 Are we such a pathetic state that we can't have the payment processing center here? If we are going to have our pockets picked, can we at least have more of our money stay in the state?

I happened to be in the middle of one of these red-light camera intersections on Wednesday in Cedar Rapids. Light turned green and a car and I entered and then traffic stopped cold. Yellow then Red, and bang my picture is taken.

Any bets on whether I get a ticket?

Any bets on whether one of these reps from Gatso ever gets a ticket?
Posted by strandediniowa at 6:27 AM

Even the citation you printed a picture of isn't a "red light runner".

It's someone turning right on red, which is a HUGE portion of the tickets they issue.

Turning right, you approach the intersection, slow down and see that there is traffic coming, but is far enough away that if you go now, you can make it with plenty of time; but if you stop, you won't make it and will probably have to wait for the light to cycle again.

What do you do? You go. It's safe, you're not endangering anyone, there's no logical reason not to go.

Except that the law says you have to come to a complete stop.

The interesting thing is that people turning right on red, whether they stop or not are almost NEVER the cause of an intersection crash.

In fact, even of actual red light runners (those crossing the intersection), the ones who generate the most tickets...those who run the light within 1/2 second of it turning red...are almost never involved in crashes.

There have been several studies conducted by independent organizations (including the Virginia DOT) that determined red light cameras cause an overall increase in intersection crashes because of rear end collisions resulting from people slamming on their brakes when the light turns yellow.

The most effective way to reduce crashes is to increase the yellow times by 1/2 second or so.

Also interestingly, the intersections that are most commonly chosen for red light cameras are not necessarily the ones that experience the most crashes, they are the ones that have the shortest yellow times.

The ONLY thing they do is generate revenue for the companies that install and run them and for the cities that allow it.

I'm trying to figure out what danger was prevented by this person turning at the intersection.

As you pointed out, Curt, nothing except some imaginary person in the crosswalk or car careening through the light.

The camera did not prevent a thing, or ensure the safety of anyone in the vicinity.

As a commentor from the Gazette online said: "Let see they put the cameras in the most dangerous intersections, then it is big news when they record an accident. Let see if we put a camera in the restroom they will end up recording someone taking a dump. Neither camera will prevent it."