Oakville celebrates for what?

In a move that will surely condemn the small town of Oakville:

Gov. Chet Culver Saturday pledged that as long as he remains in office, he will continue working to support the small town of Oakville, which was nearly wiped from the map during the Flood of 2008

Culver, a Democrat, made his comments during a dedication ceremony for the town's newest landmark, the Oakville Memorial Park. Before the ceremony, the governor shook the hands of residents and spoke with a group of paint spattered teenagers from Bellevue, who were in Oakville volunteering their labor to assist in ongoing rebuilding efforts.

With all polls indicating a defeat by former Gov Branstad, I guess he doesn't have to worry much. 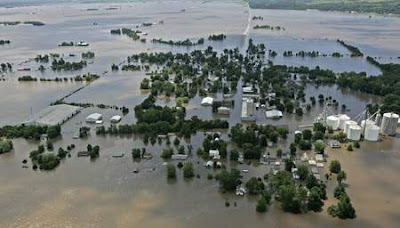 Granted not everyone in the county was affected. Oakville was about 500 people and the surrounding area under water included another 150 or so. Columbus Junction/Fredonia area had dozens more affected by the flood as well as some homes east of Wapello. I'd estimate less than 1000 people were truly affected by the flood of 08 in Louisa County. That runs to $50,000 per person.

But wait, not everyone got money since FEMA refused buyouts for those residents in Oakville, so what's going on?

Over $50 million spent on the areas affected (for a small number of people) and all they have to show for it in Oakville is a $60,000 park so that desperate politicians fighting for reelection can have a photo op?

Money taxed from one person (or borrowed from the Chinese) and given to somebody (God only knows). 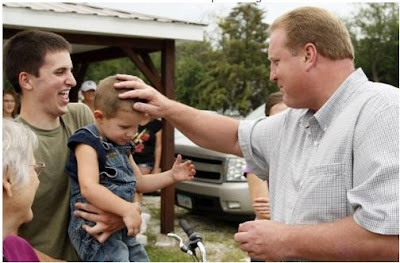 (Matt Ryerson/The Hawk Eye
Ben Lanz, 20, of Oakville holds his nephew, Treyton Schulz, 2, of Springfield, Mo., after the boy gave Gov. Chet Culver some candy from his pocket Saturday during a dedication ceremony for the new Oakville Memorial Park next to the Oakville Community Center. )

Personal account of the Oakville flood.
Posted by strandediniowa at 4:45 PM