A look at Calvin Coolidge

"Taxes take from everyone"

Calvin Coolidge, where dichotomy abounds. Liberals hate him and conservatives adore him.

Coolidge restored public confidence in the White House after the scandals of his predecessor's administration, and left office with considerable popularity. As a Coolidge biographer put it, "He embodied the spirit and hopes of the middle class, could interpret their longings and express their opinions. That he did represent the genius of the average is the most convincing proof of his strength." Many later criticized Coolidge as part of a general criticism of laissez-faire government. His reputation underwent a renaissance during the Ronald Reagan Administration, but the ultimate assessment of his presidency is still divided between those who approve of his reduction of the size of government programs and those who believe the federal government should be more involved in regulating and controlling the economy.

The election of 1924 shows Iowa having the same number of electors as California. All indications point to Iowa has having the privilege of losing another representative to Congress after this election cycle. It also shows a regional voting bloc. 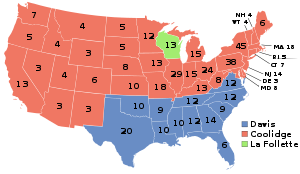 Coolidge, along with his Secretary of Treasury, Andrew Mellon, reduced taxes, retired national debt and afforded the citizens of these United States a freedom from regulating to death. Referring to a farm subsidy bill before Congress, Coolidge remarked, "government control cannot be divorced from political control."

Did I write that liberal hate him? Apparently not. They admire his mild manners that he conducted himself (while despising his policies). In a call for civility in politics, a revival for Coolidge's non-campaign campaign style (probably caused by the death of a son), the National Notary Association has published a collection of essays called "Why Coolidge Matters: How Civility in Politics Can Bring a Nation Together"

Some excerpts from the book:

“Coolidge's commitment to low taxes came out of his concept of property rights. He viewed heavy taxation as the legalization of expropriation." — Amity Shlaes, Author and Syndicated Columnist

“President Coolidge gave the American people, as Will Rogers observed, the kind of government they wanted: that is, honest, efficient, economical and pro-growth.” — Jerry L. Wallace, Historian and retired archivist from the National Archives and Records Administration

“For Coolidge, conservatism meant a strict adherence to the Constitution, a tightly limited role for the Executive Branch, and, above all, fiscal discipline.” — John Moser, Ph.D., Associate Professor of History, Ashland University

Other authors include Michael Dukakis and John Kerry, both from the great state of Taxechusetts.

And to finish with a few quotes from President Coolidge:

Collecting more taxes than is absolutely necessary is legalized robbery.

All growth depends upon activity. There is no development physically or intellectually without effort, and effort means work.

Little progress can be made by merely attempting to repress what is evil. Our great hope lies in developing what is good.

No nation ever had an army large enough to guarantee it against attack in time of peace, or ensure it of victory in time of war.

Duty is not collective; it is personal.

I would like another Calvin Coolidge to return to the Presidency, if for nothing else, for fiscal responsibility.
Posted by strandediniowa at 6:27 AM