It was in 1910 that Iowan's first took to the air. While there rages to this day, controversy over who was first and where that flight took place, it is certain that two Curtiss aviators, J.C. "Bud" Mars and Iowa native Eugene Ely flew their Curtiss biplanes at Sioux City, Iowa on June 29th and 30th 1910.

Eric Presten, Schellville,CA plans to be in attendance with his Rotec radial powered, wing warped controlled Bleriot replica. (Below) 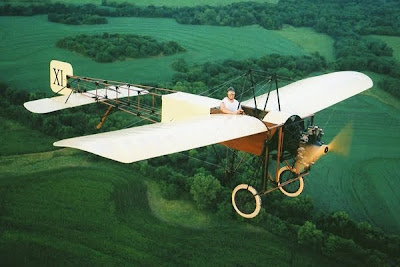 Location - 3 mi. NE of Blakesburg, IA
Posted by strandediniowa at 6:34 AM