Bawb takes the time to give us a history lesson of leftist hypocrisy:

Reminding us of the leftist calls that Bush was Hitler:

HATE, VIOLENCE, AND THE WINDOW WAR; DO AS WE SAY NOT AS WE DO
Union thugs and ACORN hoodlums engaging in actual violence at some of the town hall meetings, caught on video on more than one occasion, was not violent or hateful, nor worth covering on the news. Black Panthers blockading polling places was not hateful or intimidating. When 60’s radicals such as Obama's close friend, mentor, crony, ghost writer, and babysitter (who he didn’t really know at all) Bill Ayers were blowing up people and buildings it was their “right to protest”. When taxpayers who just got the screwing of their lives throw a few bricks, it is the end of the world as we know it, a climate of violence, danger, hatred, terrorism, civil war, mayhem, blood running in the streets, FLOODS, LOCUSTS, PESTILENCE, WE'RE ALL GONNA DIE!!!!! AAAIIIIEEEE!!!

As Orwell so eloquently put it, some animals are more equal than others. And it's easy to tell who the pigs are. Especially now that the draft horses are finally getting tired of pulling the load for everyone else.

Next, a second look at the left's own Window War

WINDOW WAR? ACTIONS SPEAK LOUDER THAN WORDS
The list goes on and on and on. Yet all we hear about is the danger and terror of politically incorrect words, and the "threat" of Tea Parties. Well, the following pictures aren't from any Tea Party. And I have yet to see a Tea Party where all the participants thought they had to wear masks to conceal their identity. 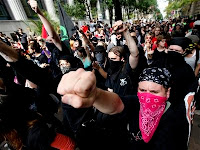 Want more? Bawb provides another example of the journalistic hypocrisy

POLITICIANS: STUPID IS AS STUPID DOES, UNLESS THE PRESS IS ON YOUR SIDE
George Bush is still ridiculed for attempting to open a locked door and Chevy Chase made an entire career out of doing Gerald Ford stumbling around, but the press was sure quiet about Barack trying to enter his new digs via a French window or bonking his head trying to enter Marine One or tripping over door jambs in Italy. Take away TOTUS (Teleprompter Of The United States) and the "most cerebral" POTUS in history can't even put together coherent sentences.

Regarding Congressman Hare (Thank you Bawb) he once again ramps up the snark.

I wish I had the time, energy and ability to peg the snark meter like Bawb does. Well done.
Posted by strandediniowa at 8:38 PM