Found at Bob Parks' Black and Right blog, Can You Fear Us Now? 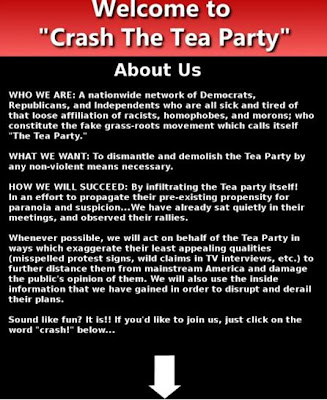 "In an effort to propagate their pre-existing propensity for paranoia and suspicion..."

Bob's thoughts: "If the Tea Party wasn’t a threat, liberals wouldn’t be performing reconnaissance and political disruption missions they’d protest being done to a foreign adversary."

They would scream the loudest if this was done to them (and they have).

For those who attend any event next week, be safe and be aware of these morons.

New thought - Crash the "Crash the TeaParty" - Infiltrate them. Hmmm.
Posted by strandediniowa at 9:58 AM

One of us ought to blow that up to poster size and use it to expose these low-lifes when they try it.

Thanks for sparking that thought.