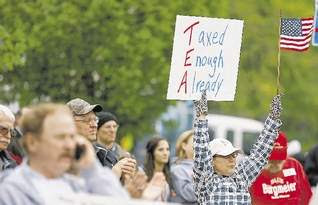 With timing being everything, Wapello County Republicans organized a rally called "Stand Up 4 Freedom" well before Obama decided to jet into the state and waste taxpayers' money for gratuitous photo-ops.

Ottumwa, Ia. — A crowd of about 200 people gathered Monday evening at a rally to voice opposition to President Barack Obama's Iowa visit - but they wanted to be polite about it.

One of the group's main organizers said the event was planned for Monday instead of during Obama's visit today out of respect for the office of the president.

"I don't feel that tomorrow is the place to protest," said Trudy Caviness, chairwoman of the Wapello County Republican Party.

In an example of a reporting excellence, the reporter didn't bother to identify Republican candidates for the 2nd Congressional district who spoke at the rally. Instead he informed the reader of the current incompetent in Congress Dave Loebsack.
Posted by strandediniowa at 8:44 PM