A simple thank you to those who've served 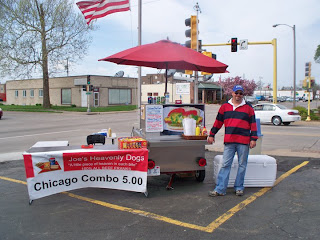 A Moline, Il. couple who owns a small hotdog stand wanted to give back to veterans last Thursday and Friday, by giving out hotdogs to veterans. But it didn't turn out as they had planned.

The two-day experience was more than Gary and Stephanie Wicall could have imagined.

The Moline couple wanted to say thank you to area veterans by offering them a free hot dog Thursday and Friday at their hot dog stand in the parking lot of K&K Hardware, 1818 Grant St., Bettendorf.

With May being National Military Appreciation Month, and Memorial Day on Monday, it made sense, they thought. Plus, their stand is called Joe’s Heavenly Dogs, named after Stephanie’s father, the late Joe Lykam, a Vietnam veteran. Gary’s father, Gary Wicall Sr., also is a Vietnam veteran.

“It was very emotional,” Gary said. “Not either one of us had that type of emotional high before. We are on top of this world. It was just something simple, but from our hearts.”

During the two days, they gave away about 150 hot dogs to veterans. They estimate that at least 300 additional veterans came, but insisted on paying.

“A lot of those guys refused it,” he said. “They said what we were doing, it meant a lot to them and they refused a free lunch.”

They operate at these locations:

I don't know when I'll be back through the QC area for sure, but if anyone is close, maybe stop by and give them some business.
Posted by strandediniowa at 6:38 PM